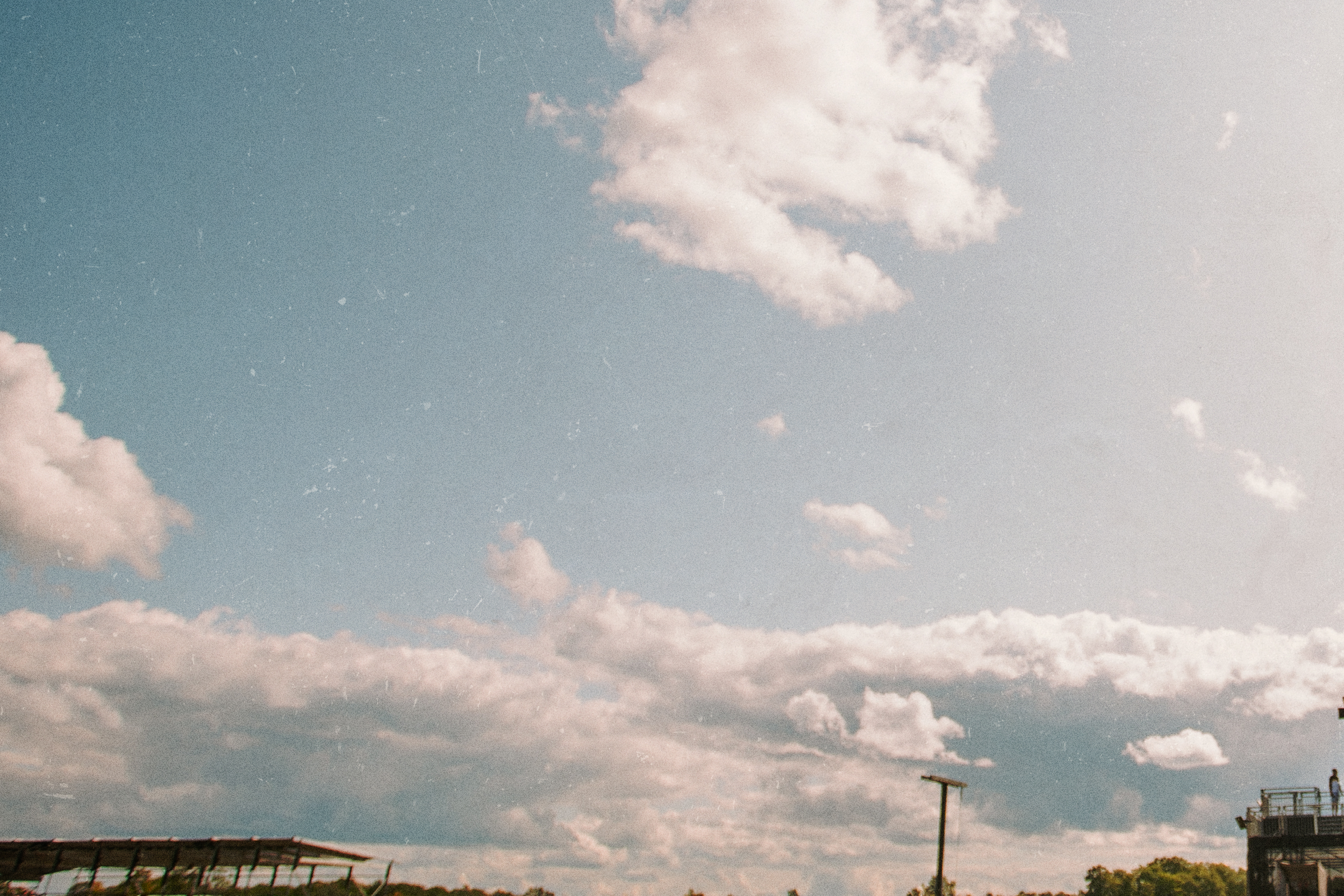 THESE BOOTS ARE MADE FOR ROCKIN🔥

Your 2023 headliners have arrived! 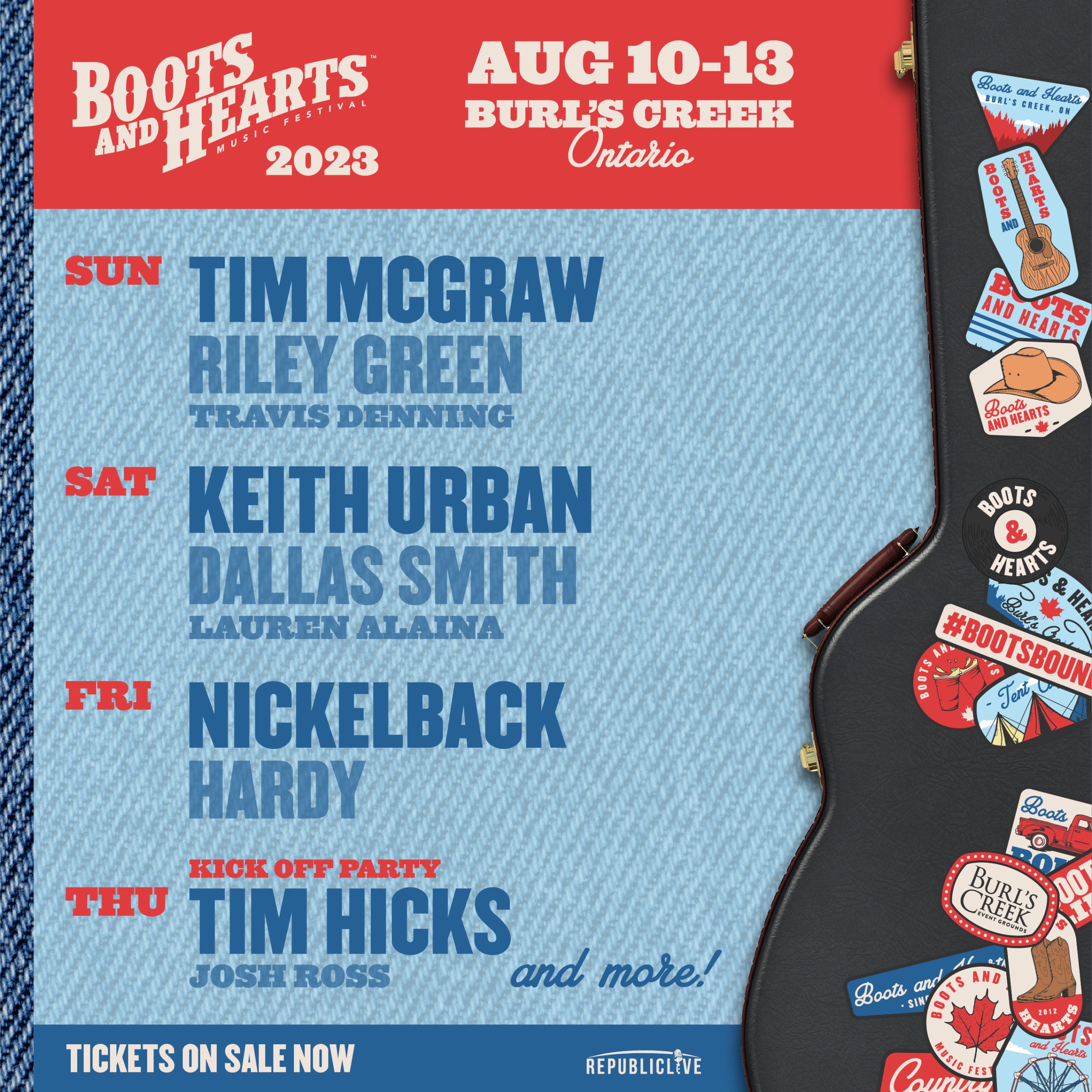 November 14, 2022, Toronto, Ontario – Republic Live, producers of the internationally acclaimed, multi-award-winning music festival Boots and Hearts, unveils the 2023 headliners and first round of performers for next year’s festival, taking place August 10-13 at Burl’s Creek Event Grounds in Oro-Medonte, Ontario. This year, Boots and Hearts celebrates the best in live entertainment with a one-of-a-kind line-up blending Country Music with the addition of Rock for fans to enjoy the ultimate festival experience. The weekend will celebrate Nickelback’s first #BootsLife experience with Boots alumni and fan favourite Keith Urban and country music superstar Tim McGraw closing out the weekend. Also announced is Riley Green, who will make his Boots and Hearts debut along with heavy hitters Hardy and Dallas Smith who return to the main stage ready to rock for 2023. Canada’s very own Tim Hicks kicks off the weekend, headlining the Thursday night Kick Off Party with rising star Josh Ross

As we approach our twelfth year of Boots and Hearts, we continue to move forward, trying new things and opening new doors. This allows us to grow and ultimately give our fans the best of the best,” says Eva Dunford, Founding Partner, Republic Live. “We work hard and aspire to be the Canadian flagship of music and experience. This includes artists, fans, partners, vendors, and our dedicated staff. Our BootsLife fans are some of the best in the world with their larger-than-life energy that we feel so grateful to celebrate year after year. Similarly, Nickelback brings a loyal, timeless fanbase and an unforgettable live show that has allowed them to soar to the top of the charts for decades and continue to break barriers. It makes it extra special to welcome them to Boots and Hearts and into our festival family. We look forward to celebrating their incredible talent and amazing rock show. Next summer will certainly be an exciting moment in the history of Boots and Hearts.

With over a decade of #BootsLife under their belt, the four-day, multi-stage Boots and Hearts Music Festival is Canada’s largest camping music festival, known for featuring top artists from around the world and earning multiple awards for their premiere event experiences, including five Canadian Country Music Association Awards, as well as international recognition from the Academy of Country Music for Festival of the Year.

Adding to the excitement surrounding the return of Boots and Hearts, Twain’s appearance on Sunday, August 7th, will feature all-Canadian, all-female main stage performances from start to finish. As a leading country music festival in North America, Boots and Hearts and Republic Live are incredibly proud to be celebrating female artists, Lindsay Ell and Robyn Otttolini with a first-ever all-female dedicated main stage headlined by the iconic Shania Twain.

“Music festivals have always been known to create once in a lifetime experiences, moments in time you can’t relive and memories that last forever. The ‘I remember when’s’ and the ‘saw it there firsts’ are something we as a company strive for and work hard to deliver to our fans year after year. We saw it with Shania at Boots and Hearts last year and we can’t wait to create another iconic Canadian moment celebrating Nickelback alongside country music icons Tim McGraw and Keith Urban.” Shares Brooke Dunford, Director of Booking and Brand Strategy, Republic Live. “The roster also includes new artists paving their way within the genre and beyond. Watching an artist like Hardy, who made his Canadian debut at Boots and Hearts in 2019 who will now open for Nickelback is extremely special for us. Transcending a new wave of country music and taking fans on a journey blending rock and country is something we’re extremely excited to celebrate and embrace as fans of live music and unforgettable moments.”

Additional confirmed performers include Travis Denning and Lauren Alaina, with many more exciting artist announcements to come. Weekend passes and single day tickets will be available for the 2023 festival, allowing guests to spend the day or experience the festival in its entirety from the first note to the last. Ticket pre-sale begins Wednesday, November 16 at 10:00AM EST and public on-sale starts Friday, November 18 at 10:00AM EST.